Here they are...all my secrets revealed! This is the step-by-step process I used for the Halloween picture I posted last week. The first step was carrying a bunch of photography gear with me when I escaped from the city to a nice serene cabin on a lake in upstate NY for the weekend with my wife. The second step was figuring out what to do with it when I got there. I knew that I wanted to take a few minutes to set up a creepy horror-inspired shot when we were there...I mean what better place than an isolated cabin in the woods in the middle of nowhere? Once we saw the place first-hand (and killed some large spiders that called the cabin home before we got there), I knew I wanted to work the fireplace and the mantle above somehow into the shot. The TV didn't get anything but static and was just for watching DVDs, so that seemed cool too...kind of reminded me of the movie "The Ring." Lastly, I knew that those windows with the curtains would look positively un-horrifying without a little moonlight shining through them to give that nightmare feel to the shot, so moonlight would have to be manufactured. 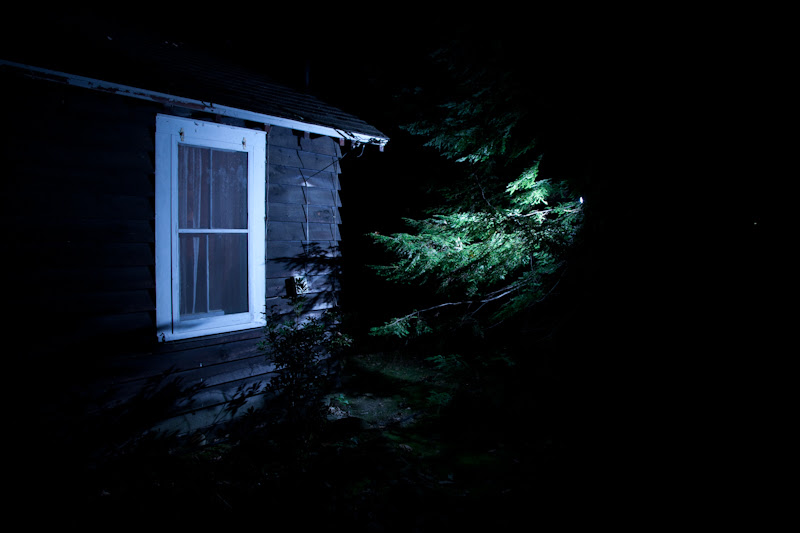 Above is how I made the moonlight. It's just a bare flash on a light stand outside the cabin in some tree, and pointed at the two windows. It looks so blue because the white balance for the entire shot is very warm, like the tungsten setting on your camera. That shifts regular white light to blue, just like moonlight would look in a dream. 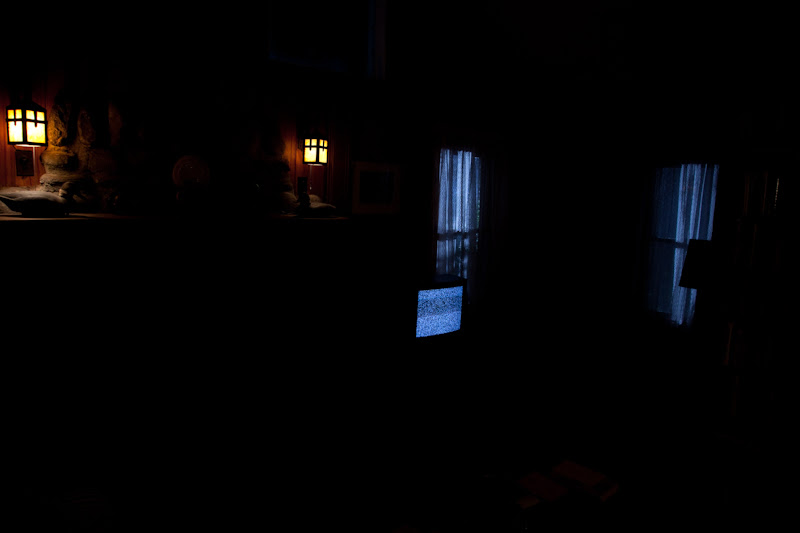 Here is the room from inside with just the moonlight flash firing. For this shot, I chose an aperture of f/7.1 for a good depth-of-field. Without any additional light, and before lighting the fire in the fireplace, the room is pretty much completely dark. 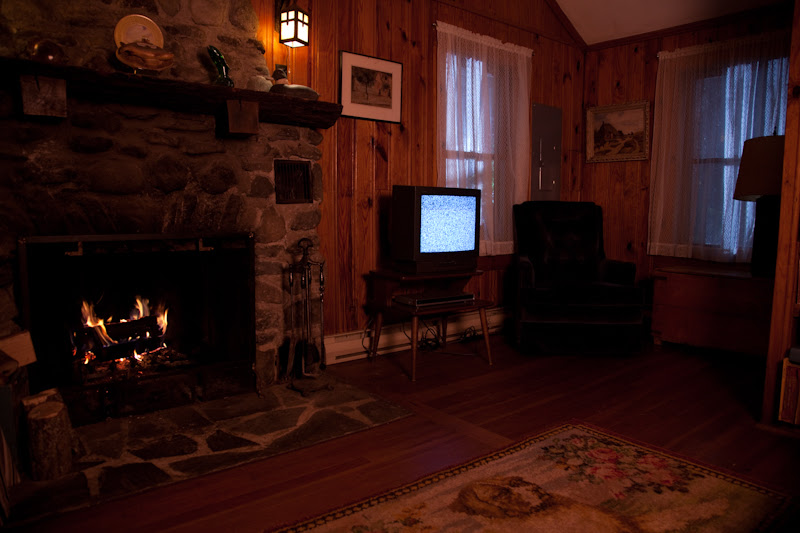 So to fix the general lack of photons in the room, I used a small softbox just out of the frame to camera right, across from the fireplace. I forgot to get a picture of the softbox placement, but it was pointing generally towards where my beautiful and talented model would be sitting in front of the TV. The goal here was to boost the level of light in the room enough to make an exposure, but I also wanted it to look like the fireplace was the main light source. To do that I needed my softbox to be even more warm in color than regular tungsten light, so the flash in the softbox got a double-CTO warming gel on it. A regular CTO gel would balance the flash with regular tungsten light temperature, and when I white balanced the picture to tungsten (to make the flash outdoors look like blue moonlight) the CTO'd flash would just look like plain old white light. So to make the light look like firelight when using a tungsten white balance, I had to go with double-CTO!

Something was missing in the above shot though. It didn't have that surreal dream-like quality to it. For that I had to slow down the shutter speed to 1 second (a tripod was essential) and let that firelight and the eerie light from the TV really soak in to the exposure. The flashes all fire off in about 1/10,000th of a second, so their contribution to the exposure didn't change. An added bonus of shooting with a slow shutter speed is the slight motion blur on the model from the ambient light, with the image of her staring into the camera frozen by the flash firing. I really liked the way it looked straight out of the camera! 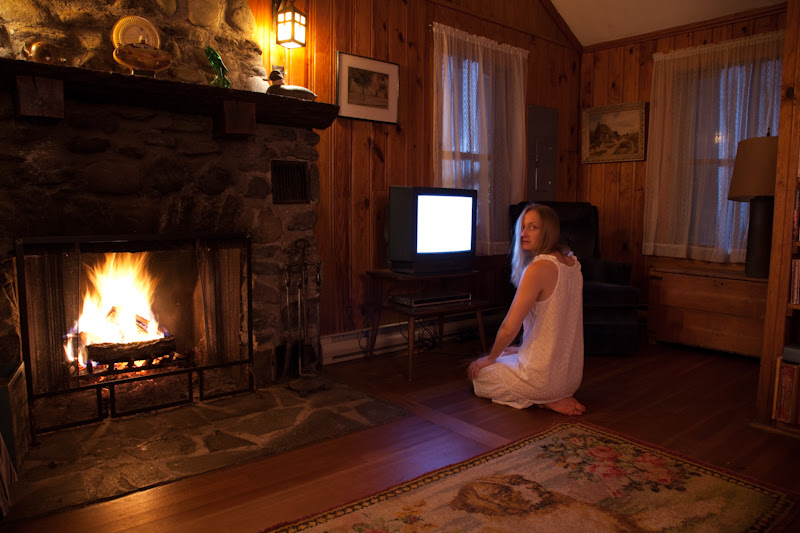 To get the final image like you see below, I did a few things in photoshop. Most notable is that I used curves and a blue filter with layer masks to selectively enhance the blue tones on the model and make the light from the TV look more apparent. I also had to overlay the TV screen from a shot done at a fast shutter speed to capture the "snow" which all blends to whiteness at a 1 second shutter speed. Then I added a texture and the image was basically done. Oh, almost forgot...I painted in a lot of BLOOD! On the floor, the walls, handprints and footprints...that was fun! Maybe I was a little too subtle with the blood though, since only about half the people that saw the picture even noticed it! (Speaking of things no one noticed, can anyone find the other hidden Halloween thingy in the final picture???) When it all came together, it looked like this: 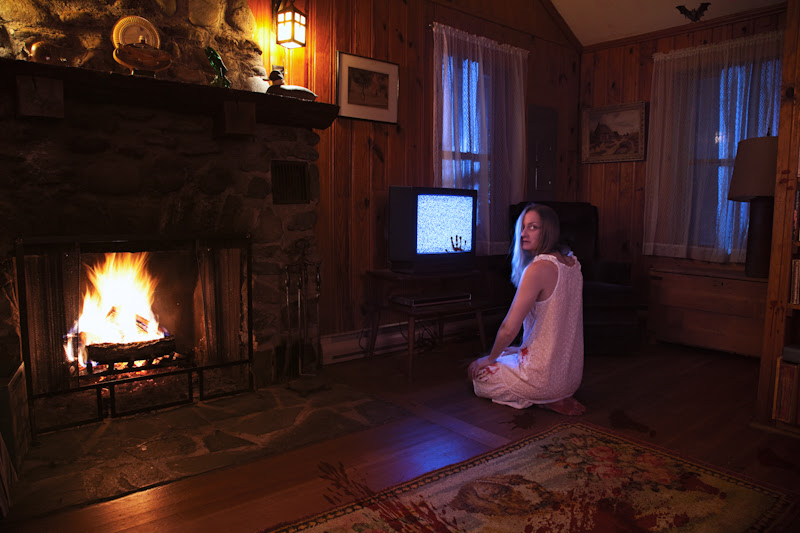 Lastly, I can't say I did this alone...I had lots of help from my wonderful model/wife...she nailed the look of the murderous spouse in the cabin deep in the woods...just the right amount of crazy and creepy in the look she's giving back to the camera to be kind of scary to me as her real-life husband. I think I will let her watch whatever she wants on TV from now on, even if it's just static...
Email Post
Labels: behind the scenes gear lighting photoshop techniques