This is the last behind the scenes post from this shoot. I used what is referred to as "clamshell lighting" as the main light here. As you can imagine, a clamshell is basically 2 large light sources arranged from above and below like the open shell of a clam. The model stands in the middle, and you shoot from between the 2 lights. This sounds too complicated...so here is a picture of the setup to make things much clearer! 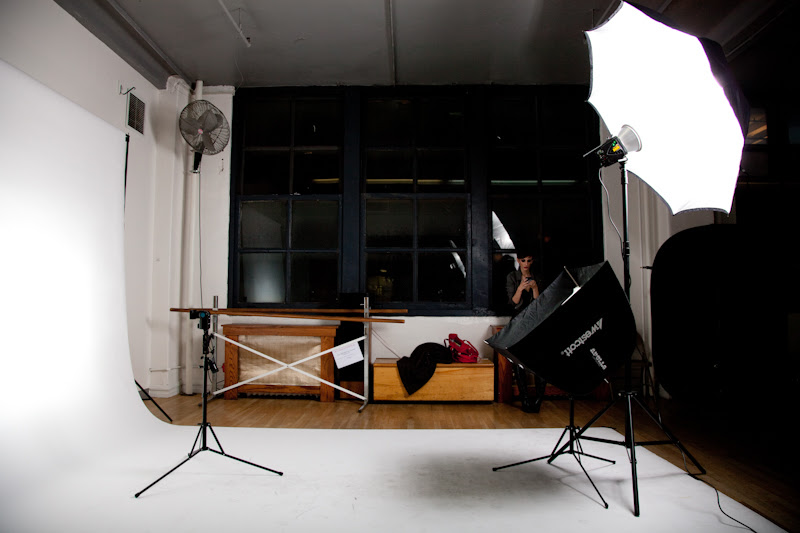 It makes it much easier to use this kind of lighting if you have a boom arm and can float the big main top light above without needing the stand directly underneath it...I, however did not have one of those yet, so I just had to carefully position myself so that I was right next to the light stand and it was just out of the frame. Incidentally, I just got a cool boom arm for Christmas...woohoo!

Clamshell lighting gives a nice flattering light that still manages to sculpt the face and cheeks and provide a good amount of wraparound lighting. The top light and the bottom light can be in different ratios: I made the top light 1 stop brighter than the bottom (2:1 ratio), but a 1:1 also works. You could even use a reflector as the bottom light, then the ratio would be more like 4:1 or 3:1 or so. Just make sure that the bottom light is never more powerful than the top light, unless you're going for that zombie look with reversed shadows under the eyes and all that...

The gradient on the background is provided by using a small speedlight directly on the background. This is sometimes called a "spray light." I just played with the power and position of the light until I got a subtle gradient going...not too much science here! Just wanted something to help separate her gray shirt from the gray-appearing background.

Well that is pretty much it from this shoot! Yay!