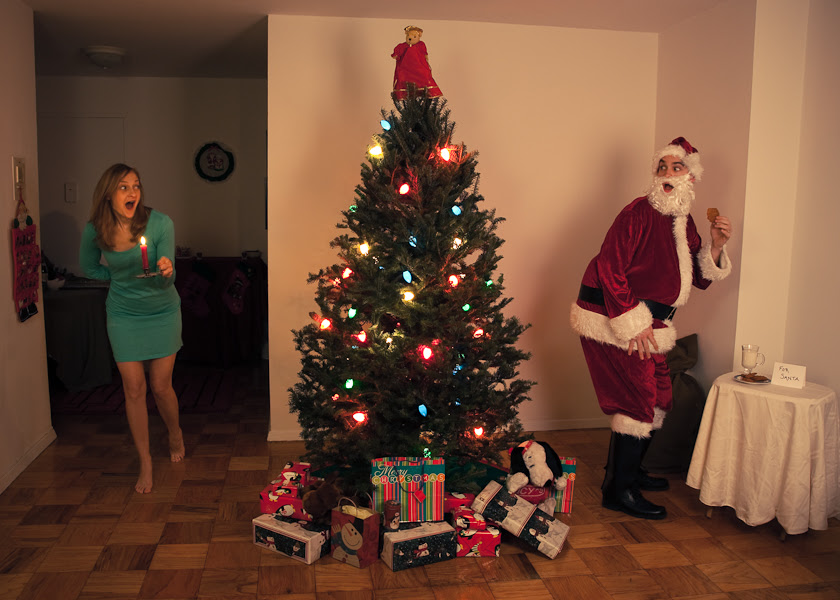 Merry Christmas and Happy Holidays! This year we decided to make our own Christmas cards instead of just buying a box at the store. About two months before Christmas, the crazy ideas were running rampant. We started out thinking of shooting outside in NYC, then thought about classic Christmas movies and recreating scenes from them. One idea was more ridiculous than the next, and by December first we had rented several reindeer and an animal handler, had put a deposit on an ice-sculpture and snow machine, and we booked an obese alcoholic circus clown that I found on Model Mayhem who agreed to dress up as Santa for the shoot (TFP of course). Well, it turns out that our apartment building has some silly rule about not allowing livestock in the elevators, and to top it off, Santa-clown puked all over the doorman’s shoes while he was signing into the building. So we had to settle for something a bit more low key instead (hey, there is always next year!) We went with the theme of Santa getting caught delivering presents on Christmas Eve, with the surprised little girl being played by the talented and beautiful Mrs. GWC. I played Santa; this required buying a Santa suit (which comes complete with a beard that was so long that I looked more like Moses than Santa, so I took the scissors to it!)

We went out for a late night search for a tree, scrounged up some old school big bulb lights and an old candle holder from the in-laws stash, and started moving furniture and setting up. Mrs. GWC wrapped all the presents that we already had for people and put them under the tree while I worked on the lighting. 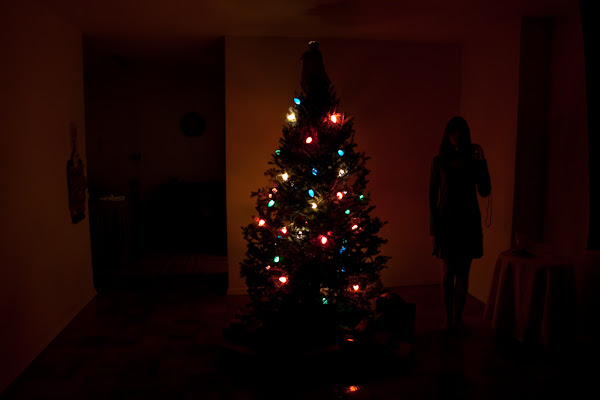 As you can see from above, with all the lamps in my apartment off the ambient lighting provided from just the tree is pretty low (this is ½ second, f/5.6, everything at ISO 100 to get the best image quality on my camera). Camera is on a tripod and the first thing to do is figure out where we would stand. Since at f/5.6 we still have a pretty narrow depth of field, we would both have to be standing about the same distance from the camera lens so we would both be in the plane of focus. So out comes the measuring tape and some scotch tape markings on the floor for each of us to stand on. That was easy.

Then I brought out some lighting: a softbox with 2 strobes in it to camera right, pointing at “Santa” and angled towards the tree a little (look at the shadows.) Another strobe with an umbrella aimed at where Mrs. GWC would be. And yet another strobe, this one with a double CTO gel on it and a grid, aimed right at Mrs. GWC’s face to look like orange candle light. And you all said I didn’t need to own all of this lighting gear!

A few things here: since I wanted to get a lot of that warm colorful ambient light from the Christmas tree lights into the image, I chose to shoot at a slow shutter speed (½ second). And since I want to make the scene look like all the light is from natural sources, the color temperature is important to maintaining that illusion. If I let the flashes just run as they are, they would put out light that looks cold and blue since they’re balanced for daylight use. I want everything to have an incandescent color balance. Enter gels: the tiny translucent pieces of colored plastic that go over the flash and change the color of the light that comes out. All the flashes were gelled full-CTO (this stands for “color temperature orange” and is supposed to balance the flash with incandescent light.) Since I wanted the candle to look like it was lighting her portion of the scene, I used a double-CTO in that flash. The grid acts to direct the light in a spotlight pattern with surgical precision, otherwise it just goes all over the room. Took a test shot: 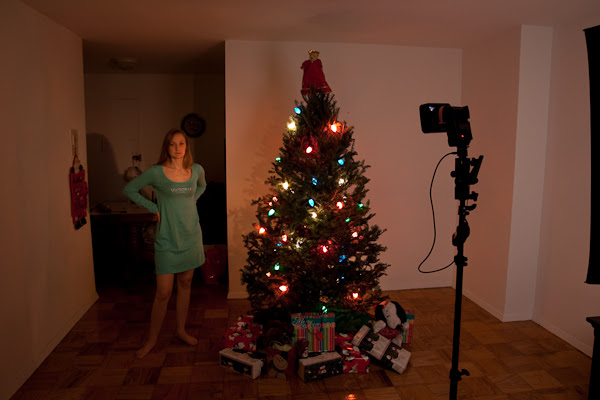 Next up is lighting ratios. I already defined the exposure of the scene above (½ second and f/5.6). So whatever I light to that level will be properly exposed. If I add less light the area will be dark, more light and it will be bright. Lighting myself was easy, just cranked up the power on the big softbox until it metered f/5.6, and done! Mrs. GWC was a bit more complicated. Since I wanted her to look like she was coming into the scene from the darkness, I lit her with the umbrella to f/4 (which is one stop darker relative to the exposure of the scene of f/5.6). Then I aimed the spotlight that was gelled to be double orange at her face and metered it to read exactly f/5.6 when fired with the fill light of the umbrella. So the final effect is that her body is underexposed by one stop, but her face (which is closest to the candle) is exposed properly and has the candle-light color to it. Popped a final test shot to check the lighting, focus, etc before strapping on the full glory of the pillow-stuffed Santa suit, beard, and hat! 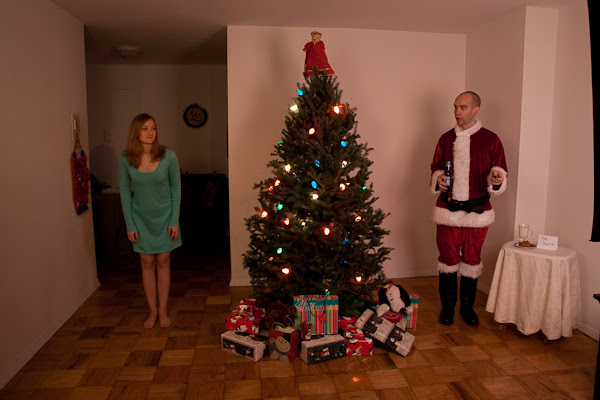 OK, finally all that technical stuff is over, now to the fun part: trying out a whole bunch of ridiculous poses! The best is that we actually couldn’t see each other while taking the picture since the tree was in the exact same plane as we are. So I’d call out “ready?” and she’d say “OK” and it was “GO!” In at least half of the pics we’re just laughing hysterically! Took a bunch of shots and that was it…now we had to move back all the furniture in the apartment!

Edited it all in lightroom (I still don’t own a copy of photoshop, what the hell is wrong with me?) Played with the vibrance and saturation and did some split-toning to give it a bit of an older feel. But that’s it. There are no selective adjustments here. Mrs. GWC laughed at me since we shot this on Saturday, ordered the cards from MPIX on Sunday, got them Tuesday, and they were mailed out on Wednesday morning. She said that’s the fastest she’s ever seen me do anything. This is probably true! 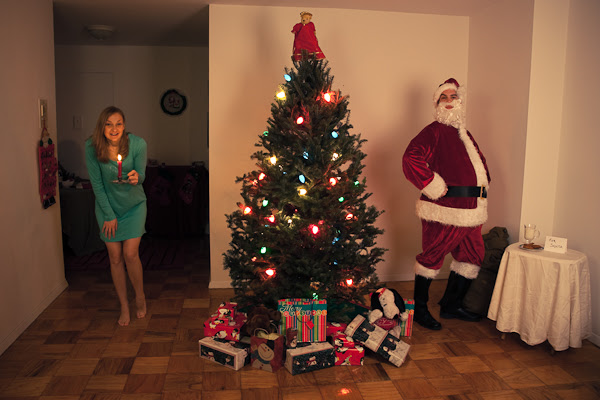 GWC and Mrs. GWC wish everyone a happy holiday season and a hope you all have a great New Year!!! Stay tuned here in 2010 for even more awesomeness!
Email Post
Labels: behind the scenes gear lighting photoshoots techniques