Dragging the shutter in the dark 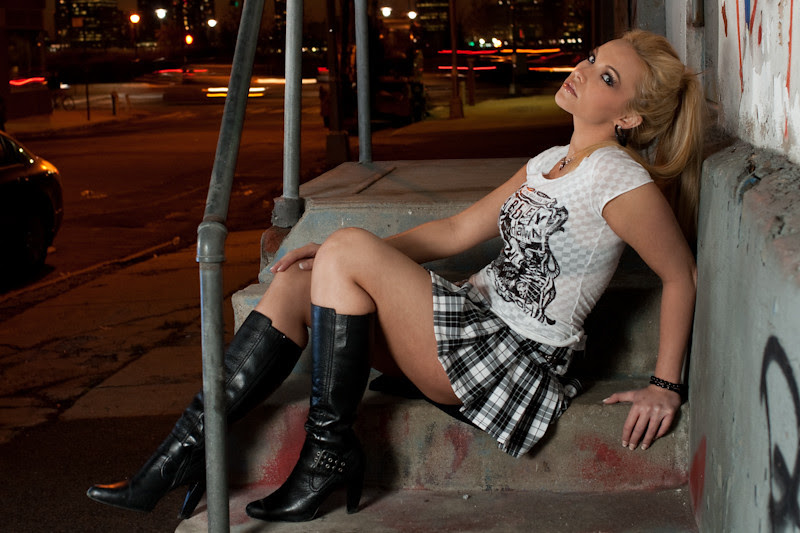 So, the video has been up for one week now and I’ve gotten a lot of great feedback on it! If you haven’t seen it yet, here is the link to youtube.

So let’s talk technique…specifically how to shoot in almost pure darkness with some off-camera lighting and get some cool effects. Sure, you can just use the flash on your camera and that would get you some pretty decent results if you knew how to set the camera in manual, but that would be too easy and no fun at all! Plus, the lighting would only come from one direction (the axis of your lens) and this would lead to unflattering shadows, red-eye, and a predictable lighting in all of your photos. Sounds pretty lame to me!

First of all, how do you focus in almost pure darkness? The camera needs some light to find the subject and focus, and it seems like my camera needs quite a bit of light depending on what lens I use (by far, the better quality, wider-aperture lenses focus faster and better in low light.) So there are a few methods that can help you focus in darkness. You can just use the pop-up flash on your camera to find focus, then switch the lens to manual focus for all the rest of the shots (can be a pain because you have to take your trigger off the camera to put the pop-up flash up). You could also use a speedlight with a focus-assist beam on top of the camera and do the same thing (maybe a bigger pain in the ass, since you would have to remove the speedlight and hook up your trigger). You could even shoot all TTL if you have the money. An obvious solution would be to use a flashlight (or a torch as the Brits call it) to shine on your subject, get your focus, change the lens to manual focus (so the focus won’t change shot-to-shot) and shoot. Except what if you don’t have a flashlight in your bag since you didn’t think you’d be out shooting at night? That’s what happened to us when we were filming this video…we wanted to use this cool location we found with the late-dusk sky in the background, but where the model was going to be was almost completely dark. Like I can’t see the stuff in my camera bag dark. So what did we do? 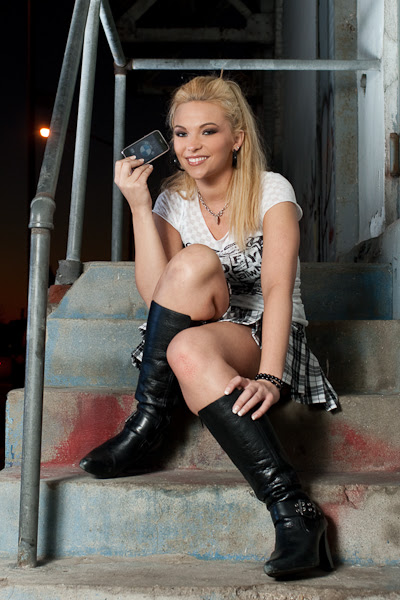 The camera autofocus will focus on bright, high contrast objects. So if Valerie holds the iPhone close to her eye, I can focus on the brightly-lit screen of the phone, lock it in by setting the lens to manual focus, and voila! For as well as this worked out for us, there were definitely a bunch of out-of-focus pics too, since as soon as either me or the model moves an inch the focus is lost! So for the future, I think I will be investing in that flashlight after all!

Ok, so now we’re all focused, my lights are set up and metered (a subject for another post) and I take a test picture. The background looks dark, the sky is black, and the car lights behind her are all frozen in time at 1/60th second. It’s boring at best, but how do I change it? We need more light! Well specifically, we need more ambient light…the flashes I’m using are all perfect because I metered them that way. There are only three ways to get more light in your image (not counting adding more lights!) Opening the aperture would give us more light, but then we’d lose the creative decision to use a certain aperture for depth-of-field and it would screw up all the flashes I’d just metered. We could increase the ISO and that would increase the light for the whole image, but would give us some unwanted digital noise in our image. Neither one of these solutions would give the cool streaks of the car lights in the background either. What’s left?

“Dragging the shutter” is the term given to using a slow shutter speed to allow more of the ambient light in to make your exposure. Think of your exposure like a pitcher of water that you want to fill to the top (a proper exposure). You could open the faucet more and fill it faster (opening the aperture), or you could hold it under the faucet at the same flow rate for a longer time (dragging the shutter). Either one will fill the pitcher up, and there are pros and cons to either method. Back to photography now, dragging the shutter will give you more ambient light at the expense of allowing camera shake to creep into the image. Camera shake comes from unsteady hands, or using too slow a shutter speed for your lens. The rule of thumb (and who knows where this comes from!) is that most people can hand-hold a steady shot at 1/60th second or faster, but this depends on the lens used. The second rule of thumb (rule of the pointer finger?) is that you shouldn’t shoot with a shutter speed slower than 1/the focal length of the lens. So since I was shooting with about a 50 mm focal length lens, I shouldn’t be able to hand-hold a clear shot at less that 1/50th second (more like 1/60th second due to rule of thumb #1).

Well, the shot above was taken hand-held at a shutter speed of 1/3rd second. Am I just so awesome that I can hold my hands rock steady at a microscopic level on command? Not likely! Valerie’s image is clear and free of camera shake because she is exposed entirely by flash! Increasing the shutter speed from 1/60th second to 1/3rd second allowed about 4 stops more light into the image, but since she was almost entirely in the dark, a four-fold increase in “no light” still equals “no light!” Since you need light to see the camera shake, we’re all good!

Flashes fire quickly, anywhere from 1/1,000 to 1/10,000 of a second, then they’re gone! So even if we hand-hold the camera for 1 minute, as long as there is no ambient light falling on the subject, the flash duration will freeze the subject in place without shake, since the exposure was made only in that brief period of time noted above. It’s kind of like being able to use different shutter speeds for the subject and the background and get one proper exposure. Pretty cool huh?

Here is the lighting setup we used for this shot and many others. Click on the picture to see lots more from this shoot, with some nitty-gritty lighting info and links to other set-up shots! 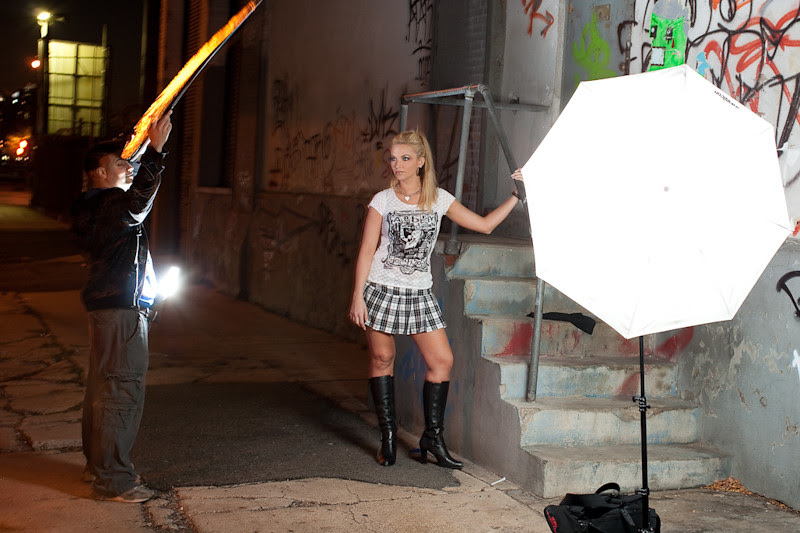 So why didn’t increasing the shutter speed screw up the light from the flashes too? Maybe the topic of another post, but your answers are always welcome in the comments section below!
Email Post
Labels: gear lighting models photoshoots techniques video